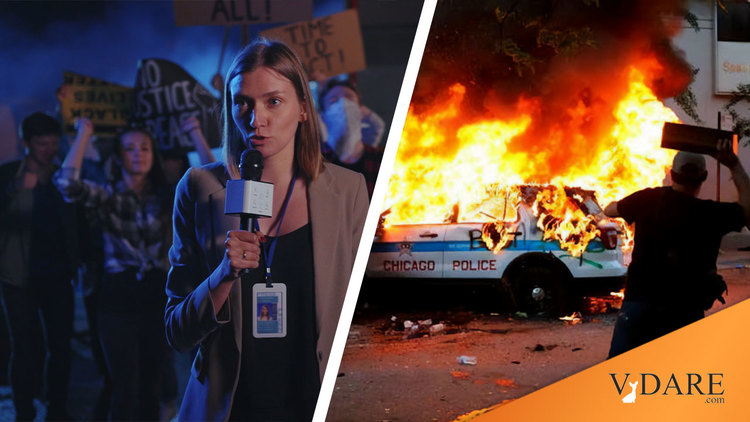 Riot Lies: If There Is Hope, It Lies with the If-It-Bleeds-It-Leads Local News

Republicans Rewrite History of the Capitol Riot, Hampering an Inquiry

Republicans in Congress are insisting that any investigation into the Jan. 6 attack include an examination of left-wing violence.

… Republicans have insisted that any inquiry include an examination of violence by antifa, a loose collective of antifascist activists, and Black Lives Matter. … Representative Andy Biggs of Arizona, the chairman of the right-wing House Freedom Caucus, used his time to show video of mob violence purportedly by antifa that had unfolded 2,800 miles away in Portland, Ore.

2,800 miles away! Is this Portland place even in the United States?

… “Let’s be honest with the American people: It was not an insurrection,” Mr. Clyde said, adding that the House floor was never breached and that no firearms had been confiscated. “There was an undisciplined mob. There were some rioters, and some who committed acts of vandalism.”

He then asked Jeffrey A. Rosen, who was the acting attorney general at the time of the attack, whether he considered it “an insurrection, or a riot with vandalism, similar to what we saw last summer,” apparently referring to racial justice protests that swept across the country.

… Ms. Pelosi said discussions had stalled given Republicans’ insistence on including unrelated groups and events, and that Democrats might be forced to undertake their own inquiry through existing House committees if the G.O.P. would not drop the demand.

… Republicans involved in the effort to shift attention from the Jan. 6 attack argue they are merely pointing out hypocrisy by Democrats, who want to investigate supporters of the former president but not those aligned with movements on the left. The topic took center stage this week over Ms. Cheney’s ouster.

Representative Kevin McCarthy of California, the top House Republican, has insisted the commission must investigate left-wing violence, while Ms. Cheney publicly undercut him by arguing that it should be narrowly focused on the events of Jan. 6.

After all, as Ms. Cheney explained, what matters is who and whom, not outdated notions like cause and effect. We can’t go around getting perspective. Yuck!

Meanwhile, from NBC 5 in Chicago:

One Year After Looting Rampages In Chicago, Few Defendants Are Getting Jail Time

Only a handful of looting suspects have had their day in court, and most who have gone through the system left with probation.

The Chicago area watched in horror last summer as hundreds of looters descended on Chicago and some suburbs, smashing windows, ransacking stores and stealing merchandise with abandon.

But a year later, an analysis of court records by NBC 5 Investigates indicates only a few dozen cases have made it through the courts and only a handful of defendants have drawn terms in prison.

The outbreaks of violence in May and August were closely linked to the timing of developments in the death of George Floyd, who died at the hands of police in Minneapolis May 25. But in contrast with the largely peaceful protests that took place in cities across America

That they were largely peaceful is what we read in the New York Times, and whoever heard of the Times pushing a narrative.

, those taking part in the looting episodes in Chicago were seen by most observers as opportunists who engaged in criminal activity with little regard for the larger issues of racial justice.

Or that’s what we saw with our own eyes here in Chicago.

… The Cook County State’s Attorney’s office approved a total of 392 cases stemming from the two looting episodes in May and August. But nearly a year after the first looters took to the streets, only 33 cases have made it through the courts. Out of those, 26 individuals received probation and only seven will end up doing time in jail. …

NBC 5 Investigates has been tracking the cases for months, and while it is true that many of the defendants who received probation had no criminal record, several had previous stays in the Illinois Department of Corrections. And we found prior convictions ranging from theft, to unlawful use of a weapon, child endangerment, felony drug charges and domestic battery.

“These were organized groups,” said Tanya Triche Dawood, the general counsel for the Illinois Retail Merchants Association. “They took advantage of this particular moment to do great damage all at once.”

Dawood stopped short of saying she wants to see more jail time for looters, noting “the fact that they have been convicted of a felony is a win.”

This is the general counsel for the Illinois Retail Merchants Association stopping short of saying she wants more jail time for looters.

… “I’d love to see them in jail for sure,” said Eddie Kim of the looters who hit his family’s clothing store on May 30. “I just wish more was done to stop those people or help hold those people accountable.”

Kim’s father Hal Tong Kim stood in the doorway and begged looters to spare his store at 34th and King Drive on May 30. He was unsuccessful and thieves ransacked the business.

No one was arrested for that episode.

“I didn’t know people were capable of that,” Eddie Kim told NBC 5. “I hate to think those people are still out there.”

Caspian Rugs on North LaSalle Street was hit during both looting episodes in May and August. Manager Lazar Malik estimated the losses at hundreds of thousands of dollars.

“The first time they broke the first window and took a lot of rugs, but
the second time was worse,” Malik said. “We need justice. I mean that’s not fair what happened to all these store owners.”

Foxx says she wants to see justice too.

The looter’s dream of being a licensed actuary is shattered.