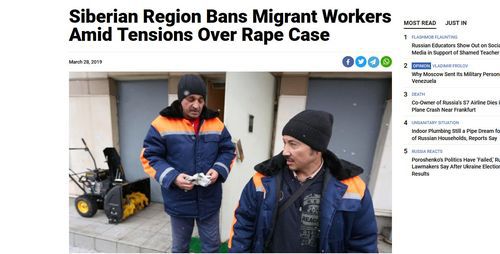 If only Americans would react like this.  What a novel idea—protecting the interests and safety of your own people.

From the English-language Moscow Times:

A Siberian region rocked by allegations that Central Asian migrants raped a local woman has banned foreign workers from being employed in 33 fields.

Earlier this month, three suspects believed to be from Kyrgyzstan were detained on charges of kidnapping and raping a resident of Yakutsk, sparking rallies and raids against migrants.

The bans apply to migrants who hold special work patents, as well as citizens of Azerbaijan, Moldova, Tajikistan, Uzbekistan and Ukraine.

Regional employers have been given three months to fire migrant workers employed in the specified fields, the decree said.

Officials in the republic of Sakha said the employment bans are unrelated to the recent surge in anti-migrant sentiments, adding that such bans date back at least two years in the region.  The bans, designed to boost native employment in specific lines of work, expanded from 14 areas of activity in 2017 to 16 in 2018.[More]