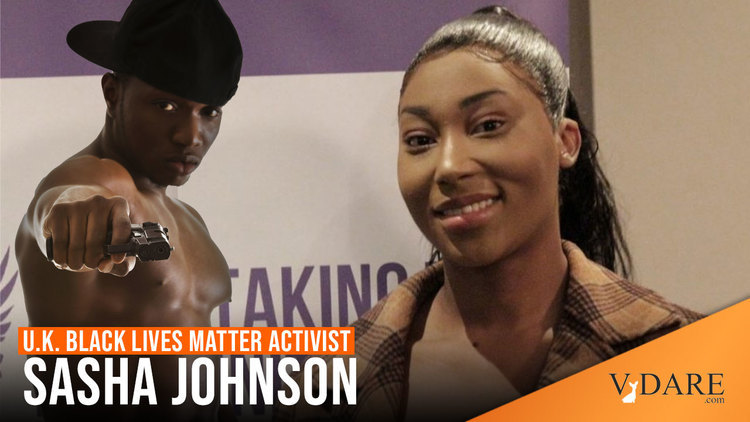 When BLM rose to prominence in the UK last year, some of us Brits asked why UK blacks were so exercised about the death of a violent career criminal in a foreign city thousands of miles away. George Floyd’s death was clearly just an excuse. Inevitably, contradictions arose.

On May 23, at a party in Peckham, south London, a 27-year-old black unmarred mother was shot in the head. When I last lived in London, Peckham was one of many black-dominated no-go areas for a white man like myself. What is of interest is not the violence itself—humdrum for the area—but the back-story of the victim and the instantaneous response by both the media and race-baiting black politicians.

Sasha Johnson , who remains sedated and apparently permanently brain-damaged, was a highly visible activist in BLMUK, in her new Taking the Initiative Party, and the New Black Panther Party.  Ms. Johnson described herself as “the Black Panther of Oxford” and dresses like a Panther, with an expensive designer-style beret and shades. Given that the original Panthers murdered people, this is like me starting up a London chapter of the Baader Meinhof Gang. But in Britain, this type of incitement is given a pass if it’s black people doing it.

UK social media longed for this to be a white man assassinating a black woman activist. As you would expect, when arrests were made, details were not released by the London Metropolitan Police. The Met warned against people “speculating” about the identity of the gunmen, another clue as to their race [Sasha Johnson: BLM activist may have been shot by mistake,  by Vikram Dodd, Kevin Rawlinson, Aamna Mohdin and Damien Gayle, Guardian, May 24, 2021].

Black activist #SashaJohnson in hospital in critical condition after sustaining a gunshot wound to the head. Nobody should have to potentially pay with their life because they stood up for racial justice #BlackLivesMatter pic.twitter.com/AlE4ELXiFl

Abbott’s assumption that Johnson was shot because she was a black activist went unchallenged.

“[I]f you don’t exalt her… If you say anything about my sister other than something positive, I don’t want you to say nothing [sic]. For those of you who want to create a narrative that is not part of this story, we see you”.

“As far as we’re aware [Johnson] was at a party and there was a rival gang that may have heard that there was a person there that they didn’t feel comfortable with, or trust, so they resorted to driving past and shooting into a garden.” [Emphasis added].

BLM activist 'shot in head by drive-by gunmen after clash between rival gangs' , by Elisa Menendez,  Metro News [UK], May 24,2021

A rival to whom? Johnson’s own gang?

Of course, it has slowly emerged that the shooters were indeed black (example here). But Ayton’s comment reveals the value system of British blacks: it is perfectly understandable to gun down partygoers if one of them is someone you “didn’t feel comfortable with.” Not one of the 40 other-odd partygoers has come forward with information [Mother of Sasha Johnson demands answers as police reveal no guests at party shooting have come forward, by Anthony France, Evening Standard, June 7 2021]

Who is Sasha Johnson? An example of her attitude: when a panel tasked with examining racism, the 12-strong team found Britain to be possibly the most tolerant country in Europe. Johnson posted on Instagram that the 11 (!) black members “house negroes… who need hanging”.

Her Taking The Initiative Party demands a nationwide racism register akin to the Sex Offenders Register[Government rejects petition calling for a register of bigots, By Will Brook, South London News February 1, 2021]. Such a database would mean that any (white) person even suspected of a racist offence would go on this list, rendering them unemployable and never again able to live near ethnic minorities.

For British whites (a.k.a. Britons), that sounds increasingly desirable.