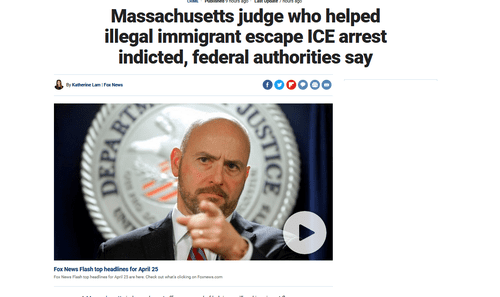 In a shocking move—shocking because the Trump Administration has allowed Sanctuary Cities, States, and Sanctuary Courts to aid, abet, and assist illegal aliens to remain in the United States and escape arrest by Department of Homeland Security (DHS) officers and agents--the United States Attorney’s Office for the District of Massachusetts (USAODM), has indicted and charged two Massachusetts District Court officials for assisting an illegal alien to escape arrest.

Your humble correspondent reported on this earlier during the investigation. This was all the more surprising since Sleepy Jeff Sessions had surrendered on protecting America by allowing Sanctuary jurisdictions to openly flout immigration law, but there is a new Sheriff in town: Bill Barr, who appears to be more interested in putting Democrat criminals in prison.

Readers will also remember that the recently arrested Judge Shelley Joseph was not the first Judge to aid an illegal alien to escape. It happened before in Oregon. There Monica Herranz, a Mexican judge on the local courts, helped a dangerous illegal alien escape, but Obama holdover Billy Williams, United States Attorney for the District of Oregon, endorsed by Sleepy Jeff to remain in his position, declined to prosecute [Mexican Judge Helps Mexican Illegal Alien Escape, by Federale, VDARE.com, March 5, 2017].

But enough about Mexican traitors, let’s deal with the renegade in Massachusetts.

A Massachusetts judge and court officer accused of helping an illegal immigrant flee an Immigration and Customs Enforcement agent waiting to take him into custody were indicted Thursday by a federal grand jury for obstruction of justice and three other counts, officials said.

Newton District Court Judge Shelley M. Richmond Joseph and the court officer, identified in court documents as Wesley MacGregor, face several charges stemming from an April 2, 2018 incident in which the pair allegedly helped Jose Medina-Perez get out of the courthouse via a back door in order to elude the ICE agent who sought Medina-Perez.

“This case is about the rule of law. The allegations in today’s indictment involve obstruction by a sitting judge, that is intentional interference with the enforcement of federal law, and that is a crime,” U.S. Attorney for the District of Massachusetts Andrew Lelling said Thursday.

However, the problem was exacerbated by Deep State saboteurs in the Department of Justice: the illegal alien in question, Oscar Manuel Peguero, aka Jose Medina-Perez and other aliases, a convicted felon and previous deportee, was released by an Immigration Judge from the immigration courts, the Executive Office for Immigration Review (EOIR), also under the supervision of then Attorney General Sessions, who did not fire the Immigration Judge in question. The law prohibits Immigration Judges from interfering with such cases, and Peguero should have had his deportation order reinstated without any hearing.

Medina-Perez’s freedom was short-lived. He was arrested a month later after the court hearing and again let go, this time by an immigration judge who freed him on bond, the Boston Globe reported. That case is currently pending, officials said. The 38-year-old native of the Dominican Republic had been previously deported in January 2003 and June 2007, ICE said. His real name is Oscar Manuel Peguero, although he goes by several aliases.

And this Immigration Judge, this Mexican judge, this local Judge, this local court bailiff, are not the only people illegally interfering with the enforcement of immigration laws. A year ago, Oakland Mayor Libby Schaaf openly aided illegal aliens to avoid arrest. Again, Sleepy Jeff and another Democrat United States Attorney, Alex Tse, United States Attorney for the Northern District of California, refused to investigate and indict this Democrat politician.

Officials are looking to block deportation flights carried out for U.S. Immigration and Customs Enforcement from an airport south of Seattle.

The executive order directs county officials to rewrite future leases with the companies that rent airport space and provide services to charter flights used by ICE.

The new contracts would prohibit the companies from servicing flights that transport immigrant detainees.

The question now is will the United States Attorney for the Western District of Washington, Brian Moran, do about this? Contact Moran here: (206) 553-7970. He now has legal precedent for prosecution of government officials who interfere with Federal officials enforcing immigration law. This is an open conspiracy, publicly announced. Time for an indictment and arrest of Dow Constantine and those who assisted him.

President Trump made some bad decisions regarding appointments, Rod Rosenstein, Sleepy Jeff, and Lady DACA to name a few. Time for him to order Attorney General Bob Barr to get the prosecutions of Constantine, Libby Schaaf, and others engaged in obstruction of immigration law enforcement and aiding illegal aliens.