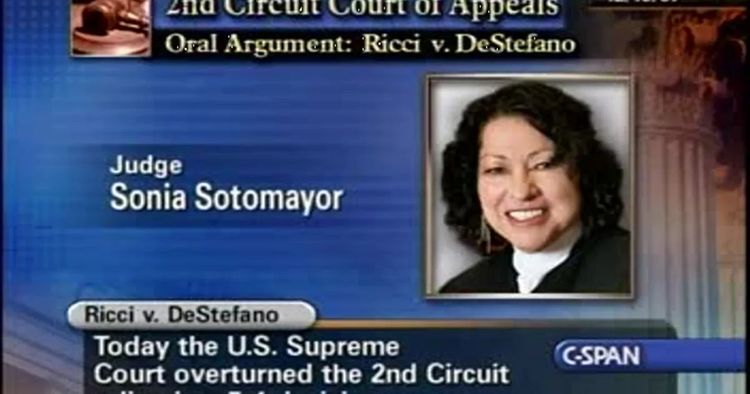 Slate: Well, Actually, It Isn't A Mystery Why Sotomayor Voted Against Ricci

Yesterday's Slate article on Sonia Sotomayor and the Ricci case was so clueless that Slate is back today with a better informed article on the case by a Stanford law prof:

New Haven's decision may sound like blatant racial favoritism, but in fact the city rejected the firefighter exam because the test violated Title VII, the federal civil rights law that prevents discrimination in employment. Title VII requires employers to consider the racial impact of their hiring and promotion procedures in order to prevent discrimination that's inadvertent as well as intentional. Ricci's claim is that the city's effort to comply with Title VII is itself race discrimination (under the 14th Amendment to the Constitution and under Title VII itself). This argument would undermine an important part of modern civil rights law. Some of Sotomayor's critics argue that, in the era of Obama, we no longer need such proactive policies to promote racial equality. But racism isn't a thing of the past yet. In fact, we haven't corrected the lingering effects of racism that is in the past. It's precisely because overt racism is no longer the main impediment to racial equality that the law against inadvertent discrimination is arguably now the most important part of civil rights law.

Well, that's one way of putting it.

Another way of putting it is that there isn't much actual discrimination going on anymore. What there is a lot of these days, however, is below average performance by non-Asian minorities.

Yes, but what if there is disparate impact for a good reason that is unmentionable: that blacks, on average, aren't as smart as whites? We are supposed to constantly act as if the racial gaps seen on the New Haven firefighters' written test were surprising when they are exactly the same as those seen on, say, graduate and professional school exams. As I wrote in VDARE.com:

And, as I wrote on VDARE.com earlier, on the five major grad and professional school tests (GRE, LSAT, MCAT, GMAT, and DCAT), blacks score at the 10th to 18th percentile of white scores.

I.e., the EEOC's (should-be, but isn't) notorious Four-Fifths Rule. If the highest scoring group passes at, say, a 50% rate, then the lowest scoring group better pass at a 40% or higher rate or the federal government will want to know the reason why? Since there is a one standard deviation difference on average in cognitive ability, only about one-third of blacks score above the white median, not four-fifths. The Four-Fifths Rule assumes the average black IQ is about 96 (when the average white's IQ is assumed to be 100), when it's more like 85.

By the way, have you noticed how ignorant the Four-Fifths rule is simply in terms of simple statistical numeracy? Personnel selection differences should be measured in standard deviations, not in percentages. Using a simple-minded fraction like Four-Fifths invites catastrophic game-playing. For example, the city of Chicago has recently gotten around the Four-Fifths Rule by setting the pass rate so low that 85% of applicants passed the fireman's entrance exam and policeman's promotion exams. This allows the pass rate for blacks to be Four-Fifths of the white rate, but it means that really stupid whites and blacks get important jobs.

We'd get better firemen and policemen with outright quotas.

New Haven was right to worry about the possibility of a lawsuit from black firefighters if it accepted the results of the tests.

The city was also in a bind because its agreement with the firefighters union required that the [written] exam count for 60 percent of the decision about whether to promote each candidate and because a city charter rule required that every promotion go to one of the three top-scoring candidates.

In other words, collective bargaining agreements and Civil Service laws designed to prevent politicians from rigging the test are such a nuisance when the goal is to rig the test.

These rules magnified the disparate racial impact of the exam—no black candidate and only one Hispanic candidate was eligible for promotion, even though several of them passed the test. More reason for the city to worry about a lawsuit by the African-Americans who were to be passed over. ...

But, properly applied, disparate impact law doesn't excuse poor performance, nor does it require quotas. Instead it smokes out hidden bigotry and requires employers to avoid unnecessary segregation of the work force. Suppose an employer wants to keep women out. Knowing that he can't just put a "women need not apply" sign in his window, he might use a proxy, such as a weightlifting test, knowing that women on average have less upper body strength than men.

In other words, the law says that we should be suspicious of any fire department that looks for upper body strength in firemen, and we should force each and every fire department in America to prove, over and over, that being weak is a genuine detriment in fire fighting.

The law against disparate impact discrimination is designed to reveal such hidden bias. Now, suppose an employer has no desire to discriminate against women but uses a weightlifting test simply because he thinks, all other things equal, stronger employees are better than weaker ones. Disparate impact law also prohibits this: It requires the employer to reconsider job qualifications that favor one race or sex, unjustifiably.

Of course, there might be a good reason to prefer people who are physically stronger—or who score higher on a written exam. The law gives employers a chance to prove that the discriminatory criteria are job-related. The idea, then, isn't to make an employer hire less qualified women or minorities over more qualified men or whites. It's to make sure the employer is testing for job qualifications, not unrelated ones.

That's arguable, but let's accept it for now.

In practice, however, the way it actually works out is to encourage permanent de facto quotas for NAMs. If vast mechanisms exists for searching out and punishing those who unwittingly discriminate against NAMs but the punishment for discriminating against whites is haphazard and rare then, well, what do you know!, lots of employers will wittingly (if surreptitiously) discriminate for NAMs and against whites.

But Ricci isn't attacking the timing of New Haven's decision; he's attacking the city for considering the racial impact of the exam. And that's exactly what disparate impact requires an employer to consider. Ricci's position threatens to burn down one of the nation's most important civil rights laws. Even in the improved racial climate of the Obama era, that should set off alarms.

Perhaps in the unimproved economic climate of the Obama era, the fact that one of the nation's most important civil rights laws promotes the hiring of less competent employees should set off alarms.

My prediction for Ricci is that Anthony Kennedy will uphold Disparate Impact in general, but send the Ricci case back to the district court for retrial on the facts on the grounds that the city refused its testing company's offer to perform the validation study included in its $100k contract. Frank Ricci will get the promotion he earned in 2003 around 2012, but the overall system across America will continue more or less the same.

Also, Sonia Sotomayor isn't going to go down over the Ricci case. But it just shows how intentionally ignorant the press is about the realities of civil rights law that Slate could blunder into this like it has.