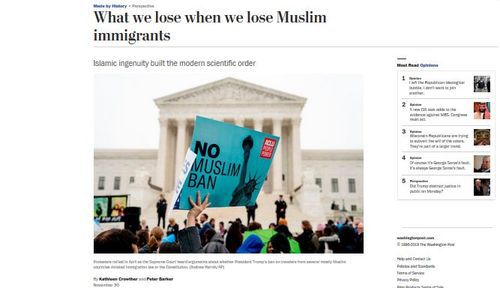 So Muslims Inspired Copernicus? What Have They Done SINCE 1543?

Writing in the Washington Post two scientists tell us about "what we lose when we lose Muslim immigrants," as the headline goes:

One of President Trump’s first acts in office was to institute his “Muslim ban,” targeting travelers from several majority-Muslim countries. Even before the Supreme Court ruled in June that the revised ban was constitutional, it was already having a profound effect. As of April, the number of Muslim refugees to the United States had plummeted by 91 percent, with a 26 percent drop in immigration and a 32 percent decline in temporary visa issuances from majority-Muslim countries.

In addition to devastating personal consequences for individuals and families, these restrictions have had profound ramifications for scientific communication and collaboration. The numbers of international students enrolling at U.S. universities dropped by 7 percent in 2017, after reaching a record high in 2016. Postdoctoral scholars find it increasingly difficult to secure visas to work in U.S. laboratories. And the work of multinational scientific research teams has been disrupted in the wake of anti-Muslim and anti-immigrant legislation. ...

International scientific collaboration may seem like a recent phenomenon, a late-20th-century product of the Internet and ease of global travel. But international communication and exchange of ideas have been a defining feature of science since at least the Middle Ages. The modern scientific order was built on international exchange—and if the United States continues to prohibit such collaboration, its role as a leader in science and medicine will be in serious jeopardy.

For immigration patriots, this is great news, but the eggheads who wrote this want you to believe the moratorium on Muslim travel is harming science. How do they prove the point? By going to back to some early Mohammedan discoveries that supposedly gave Copernicus the idea for the heliocentric universe.

And that's all they provide to show why we need more Muslim scientists.

The science that descended from Copernicus—the origins of modern Western science—is the product of international, multilingual, multicultural exchange and collaboration, with a special debt to Muslims. Restrictions on such exchange will ultimately damage science. We did not get where we are on our own. We would not have got here at all without Muslim scientists. And we still need each other.

That's all these two have? Copernicus copied Muslim astronomers?

Whether modern science "descended from Copernicus" and therefore owes its roots to Islam is debatable. Others would argue otherwise. But even if it did, the idea that we "need" Muslims today for science to progress is utter nonsense.

The Islamic mind is dead, killed by a political ideology masquerading as a religion. That is why the Islamic world is mired in either poverty, violence or both.

So no, we don't need that here.