The Supreme Court has upheld Trump's "travel ban" prohibiting people from some but not all Muslim countries from coming to America.

The decisions by various judges blocking it were always crazy--see #NeverTrumper David Frum On Why The Hawaiian Judge Attacking Trump's Travel Order Is Crazy.

The Supreme Court proved to not be crazy...by a vote of 5-4.

WASHINGTON (AP) — A sharply divided Supreme Court on Tuesday upheld President Donald Trump’s ban on travel from several mostly Muslim countries, rejecting a challenge that it discriminated against Muslims or exceeded his authority. A dissenting justice said the outcome was a historic mistake.

The 5-4 decision Tuesday is a big victory for Trump on an issue that is central to his presidency, and the court’s first substantive ruling on a Trump administration policy. The president quickly tweeted his reaction: “Wow!”

Roberts wrote that presidents have substantial power to regulate immigration. He also rejected the challengers’ claim of anti-Muslim bias.

But he was careful not to endorse either Trump’s provocative statements about immigration in general or Muslims in particular, including Trump’s campaign pledge to keep Muslims from entering the country.

“We express no view on the soundness of the policy,” Roberts wrote.

The travel ban has been fully in place since December, when the justices put the brakes on lower court rulings that had ruled the policy out of bounds and blocked part of it from being enforced.

In a dissent she summarized in court, Justice Sonia Sotomayor said, “History will not look kindly on the court’s misguided decision today, nor should it.” Justices Stephen Breyer, Ruth Bader Ginsburg and Elena Kagan also dissented. [More] 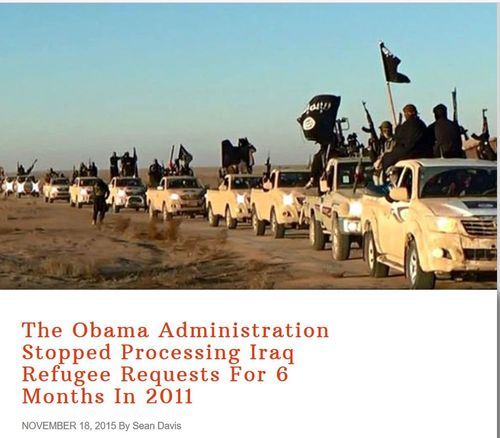 That last one is by me--in 2011, during some serious upheavals in the Muslim world, Obama put a ban of sorts on exactly the same countries Trump picked.

That was the list Obama Administration used. Under what is called the Visa Waiver Program Improvement and Terrorist Travel Prevention Act of 2015, the Obama Administration "targeted" i.e executed some care, in issuing visas to these countries. Trump has just said, temporarily, "No visas."

I think Obama's defenders feel that it's the same as his "opposition" to gay marriage—he may have banned Muslim immigrants from ISIS-type countries in 2011, when he was facing reelection but he didn't really mean it.

Trump, by contrast, really wants to protect America, and there's a lot of opposition to that.

Including, at this point, four (but not five) votes on the Supreme Court.