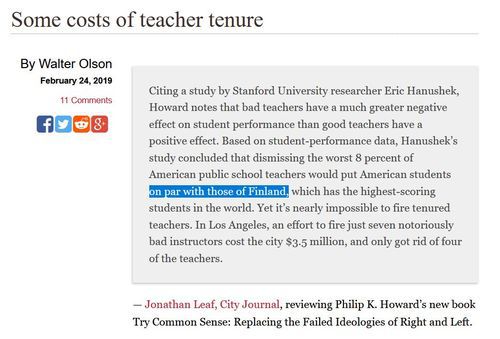 Consider teachers’ unions. Citing a study by Stanford University researcher Eric Hanushek, Howard notes that bad teachers have a much greater negative effect on student performance than good teachers have a positive effect. Based on student-performance data, Hanushek’s study concluded that dismissing the worst 8 percent of American public school teachers would put American students on par with those of Finland, which has the highest-scoring students in the world. Yet it’s nearly impossible to fire tenured teachers. In Los Angeles, an effort to fire just seven notoriously bad instructors cost the city $3.5 million, and only got rid of four of the teachers. [Emphasis added.]

That's via Walter Olson at Overlawyered, who quoted that excerpt. 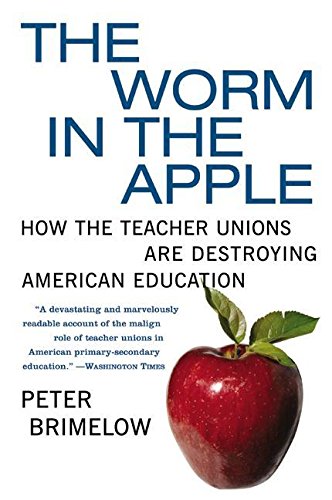 While I am thoroughly familiar with the problems caused by teacher unions (Peter Brimelow's 2004 book The Worm in the Apple: How the Teacher Unions Are Destroying American Education called them the Teacher Trust) taming them by legislation will not bring American students up to the level of Finnish students.

Because of mass immigration, students in America  (many of them neither American citizens or legal residents) are less than fifty percent white.  What schools will be trying and failing to do is bring them up to the level of American students.

As Steve Sailer has repeatedly pointed out, Finland's success in international standardized tests is due to them being Finnish. As I insist on pointing out every time this happens, there is a school district in America which matches Finland's scores. It's in the Upper Peninsula of Michigan, where mass immigration has traditionally come from Finland.

I discover, searching VDARE.com's archives, that economist Eric Hanushek (cited above) is a believer, and famously wrote in  2000  in a paper he co-authored that "We assume that the international level of average ability of students does not vary across countries." That's weird, but not as weird as thinking you could turn America into Finland by firing 8 percent of the teachers.