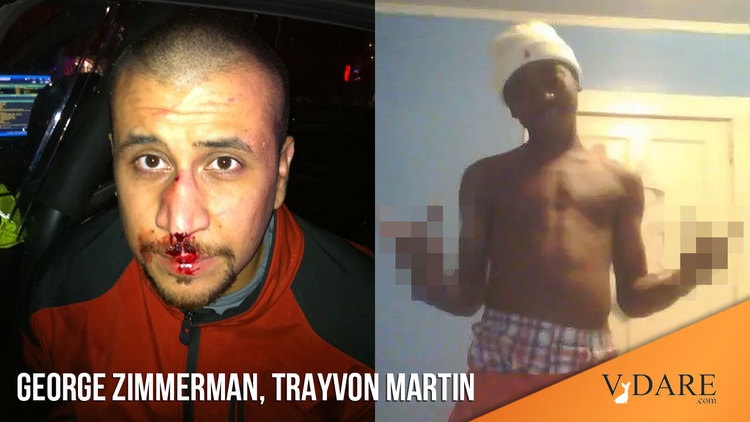 Leaving aside the war over there, covered by me on Saturday, how about the war over here? I mean of course the Cold Civil War between Goodwhites and Badwhites, Tutsis and Hutus; between urban college-educated progressives and mean, unwashed good ol' boys with guns, Bibles, and pickup trucks.

In relation to this, I note that Saturday, February 26th, was also the tenth anniversary of George Zimmerman shooting Trayvon Martin in Sanford, Florida.

That shooting was, I think, a key milestone on the road to the extraordinary anti-white racial hysteria of today. Among other things it gave us the fashionable and extremely well-financed anti-white terrorist organization Black Lives Matter, which came into existence following Zimmerman's acquittal at trial in July 2013.

That trial was reasonably well conducted, in spite of efforts by the media, notably NBC, to edit Zimmerman's phone calls to make him sound anti-black.

The main effort to rig the trial against Zimmerman came from Benjamin Crump, attorney for Martin's family. Trayvon Martin had been on the phone with his girlfriend right up to the final struggle. That girlfriend, however, was unwilling to testify in court, so Crump used her half-sister Rachel Jeantel as a substitute [ A Decade of Deceit and Division: What Trayvon Wrought, by Jack Cashill, American Thinker, February 24, 2022]. This backfired, though, Rachel Jeantel being such a poor witness her mumbled, incoherent testimony was probably a key factor in getting Zimmerman acquitted.

This wasn't as much of a setback to the anti-white Tutsi establishment as it might have been, as Zimmerman was not in fact very white. His mother is an immigrant from Peru, part-indigenous; his first language was Spanish; his great-grandfather was black. Not really an authentic Hutu.

Fate has recently been much kinder to the anti-whites. It gave them, in succession, the Brunswick Three, Derek Chauvin, and Kimberly Potter.

Taking the last case first: Kimberly Potter is the white female Minneapolis police officer who drew her pistol in error, thinking it was her taser. She shot a black perp. Last Friday she was sentenced for first- and second-degree manslaughter. She got a two-year sentence, although there's a good case to be made that what she did was lawful homicide, and I'll be interested to see what happens on appeal.

Show trials were duly staged, Derek Chauvin and the Brunswick Three being tossed into the volcano to appease the Diversity God.

This week saw further developments in both cases. The defendants in the Derek Chauvin case you could call the Minneapolis Three: the three police officers who were present with Chauvin when George Floyd went to his reward. They have a state trial scheduled for this June on charges of aiding and abetting the unlawful killing of Floyd.

What we had this week was a verdict, Thursday, on the federal "civil rights" charges against the three. And no, this is absolutely, totally not double jeopardy. If you think so you are at best a pitiful ignoramus with no understanding of the law, and at worst probably a Nazi.

The verdict on the Minneapolis Three was of course guilty. Sentencing procedures will start next week. Then in June the state trial—which, once again, will not be an instance of double jeopardy. No way! Absolutely not!

Finally, the Brunswick Three, all of whom were sentenced to life in prison last November on state charges of having murdered famous jogger Ahmaud Arbery.

Tuesday this week they got the federal treatment. All were found guilty of federal hate crimes and attempted kidnapping.

I get the hate crimes thing: it means having bad thoughts, right? I can't understand the attempted kidnapping charge, though. I followed this case pretty closely and I can't recall any point at which the defendants grabbed Arbery and tried to tie him up and drag him away.

I guess "kidnapping" means something else in Georgia law: hailing a guy on an open street and asking him to stop so you could talk to him, perhaps.

What's that you say? Double jeopardy? Shut up! for goodness' sake. You don't know anything.

As if the show trials of the Brunswick Three weren't appalling enough, the Georgia state legislature has topped them off with a nasty little insult. They have passed a resolution designating February 23rd, the date of Ahmaud Arbery's passing, to be celebrated this year and forever after in the state of Georgia as Ahmaud Arbery Day.

One of the cosponsors of the resolution, I note was a Republican, Don Hogan. Yep, that's the GOP we know and love.

The legislature's resolution encourages celebrants to run 2.23 miles on that day to advocate for racial equality. That is, of course, in addition to burning votive candles and prostrating themselves before images of the deceased. Who says religion is disappearing from our public life?