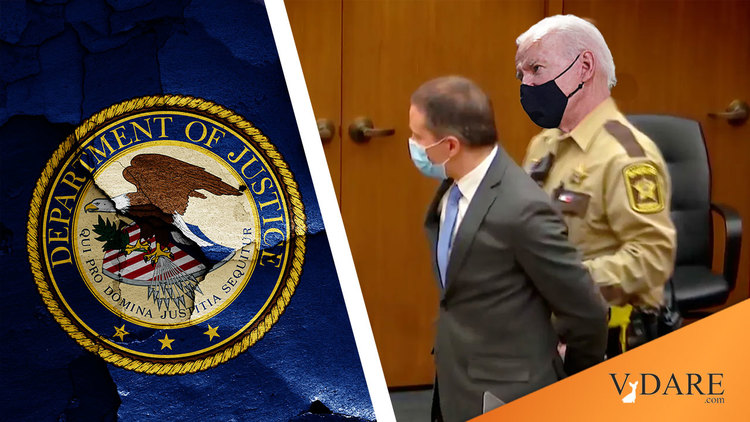 From the Daily Mail:

REVEALED: Feds ‘had secret backup plan to ARREST Derek Chauvin in court if he was cleared of killing George Floyd’ – and now the DOJ plans to pursue hate crime charges against him and the three other cops

By RACHEL SHARP FOR DAILYMAIL.COM

Secret Department of Justice plans to arrest Derek Chauvin in court had he been cleared of murdering George Floyd have been revealed.

Multiple sources told the Star Tribune federal prosecutors were ready to move in and charge the white ex-cop on federal counts moments after a not guilty verdict on charges of second and third-degree murder, as well as manslaughter, or in the event of a mistrial.

Department of Justice prosecutors now also plan to bring civil rights violations charges – akin to hate crimes – against Chauvin and the three other cops on duty with him when Floyd was killed in May 2020.

Their secret plot saw DOJ investigators collaborate with their state counterparts at Minnesota US Attorney’s Office to arrange [to] charge Chauvin by criminal complaint. That process does not require a grand jury, and would have sped up the process of bringing fresh charges against Chauvin, 42.

Following his arrest, federal prosecutors would then have asked a grand jury to indict Chauvin.

The sources said these discussions were part of a contingency arrest plan to ensure Floyd’s murderer did not walk free, amid fears such a verdict would have prompted fresh chaos in riot-ravaged Minneapolis.

Ultimately, the backup plan did not have to be used, after Chauvin was found guilty of all three counts he faced.

I wonder what the back-up plan would be if the federal jury had acquitted him? Suspension of the Constitution so he could be put in triple jeopardy? Military drumhead court-martial and summary execution?

The DOJ is now planning to indict him and the three other cops involved in Floyd’s death on civil rights charges, a source told the Tribune.

Meanwhile, the Biden DoJ isn’t even waiting for a state trial in the case of Ahmaud Arbery, a prowler who was killed because he thought he was as fast as his NFL defensive back cousin, but wasn’t quite fast and strong enough to grab the gun from the defendant’s hands.

WASHINGTON (AP) — The Justice Department brought federal hate crimes charges Wednesday in the death of Ahmaud Arbery, charging a father and son who armed themselves, chased and fatally shot the 25-year-old Black man after spotting him running in their Georgia neighborhood.

Travis McMichael and his father, Gregory, were charged along with a third man, William “Roddie” Bryan, with one count of interference with civil rights and attempted kidnapping. The McMichaels are also charged with using, carrying and brandishing a firearm during a crime of violence.

The case is the most significant civil rights prosecution undertaken to date by the Biden administration Justice Department and comes as federal officials have moved quickly to open sweeping investigations into troubled police departments as civil rights takes center stage among the department’s priorities.

The indictment charges that the McMichaels “armed themselves with firearms, got into a truck and chased Arbery through the public streets of the neighborhood while yelling at Arbery, using their truck to cut off his route and threatening him with firearms.” It also alleges that Bryan got into a truck and then chased Arbery, using the vehicle to block his path.

Arbery, 25, was killed on Feb. 23, 2020, by three close-range shotgun blasts after the McMichaels pursued him in a pickup truck as he was running through their neighborhood. Arbery had been dead for more than two months when a cellphone video of the shooting was leaked online and a national outcry erupted.

The Georgia Bureau of Investigation took over the case the next day and swiftly arrested Travis McMichael, who fired the shots, his father, and Bryan, a neighbor who joined the pursuit and took the video. The three men remain jailed on state murder charges and are due back in court in May.

S. Lee Merritt, an attorney for Arbery’s mother, Wanda Cooper-Jones, applauded the hate crimes charges Wednesday, tweeting that the federal case would “serve as a fail-safe to the state prosecution.”

The McMichaels’ lawyers have said they pursued Arbery, suspecting he was a burglar, after security cameras had previously recorded him entering a home under construction. They say Travis McMichael shot Arbery while fearing for his life as they grappled over a shotgun.

The double jeopardy clause of the Fifth Amendment says, “[N]or shall any person be subject for the same offence to be twice put in jeopardy of life or limb…” The Supreme Court has ruled that the double jeopardy ban also applies to states via incorporation by the Fourteenth Amendment.

For example, when the jury didn’t reach the verdicts it was supposed to in the trial of LAPD officers for doing what it took to subdue an angel-dusted Rodney King, the feds stepped in and tried them for the exact same events. This time the jury reached a verdict that did not lead to the mob burning down much of Los Angeles. (Interestingly, in an interview with the New York Times, three jurors said that after watching the video over and over, they concluded that only the very last blow was unjustified beyond a reasonable doubt.)

Strikingly, the Justice Department has what it calls the Petite doctrine that it will act as if the double jeopardy ban applies to itself. From Wikipedia:

Under this policy, the Department of Justice presumes that any prosecution at the State level for any fact applicable to any Federal charge vindicates any Federal interest in those facts, even if the outcome is an acquittal. As an example, a person who commits murder within the jurisdiction of a State is subject to that State’s murder statute and the United States murder statute (18 U.S.C. § 1111). The Federal government will defer to the State to prosecute under their statute. Whatever the outcome of the trial, acquittal or conviction, the Department of Justice will presume that prosecution to vindicate any Federal interest and will not initiate prosecution under the United States Code.

On the other hand, the DoJ says it can ignore its own Petite policy if it is really not in the mood to obey it.

The presumption also may be overcome, irrespective of the result in a prior state prosecution, in those rare cases where the following three conditions are met:

– The alleged violation involves a compelling federal interest, particularly one implicating an enduring national priority.
– The alleged violation involves egregious conduct, including that which threatens or causes loss of life, severe economic or physical harm, or the impairment of the functioning of an agency of the federal government or the due administration of justice, and
– The result in the prior prosecution was manifestly inadequate in light of the federal interest involved.

And what is a more compelling federal interest than eradicating any findings of juries that would cast aspersions on the sainthood of a Rodney King, a George Floyd, or Ahmaud “Jogger” Arbery?