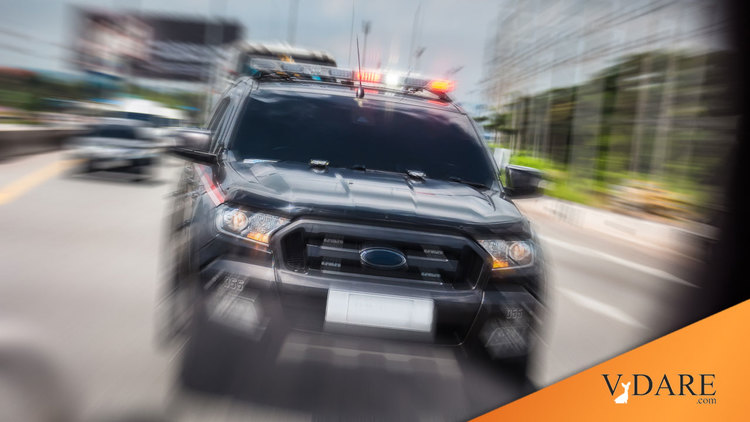 The Floyd Effect, Part 62: More Bad Drivers Flooring It When Cops Try to Pull Them Over

Earlier: "Racial Profiling" And Bad Black Drivers: Blacks Speed Twice As Much As Whites And "Speed At Reckless Levels Even More"

From the NW News Network:

Since January of this year, more than 900 drivers have failed to stop for a Washington State Patrol trooper trying to pull them over. The patrol and other police agencies around the state say they’ve never seen such blatant disregard for their lights and sirens. The change in driver behavior comes after state lawmakers passed strict new rules on when police can engage in pursuits.

It was just before 6 p.m. on a Wednesday evening last month when a state trooper spotted a white BMW with California license plates passing on a double yellow line along Deschutes Parkway near Washington’s Capitol.

In the interest of public safety, the state of Washington should legally mandate that all white BMWs with California license plates must be preceded by a man walking down the street waving a flag and shouting to pedestrians, “Run for your lives! A white BMW from California is coming!”

Dashcam video from that evening shows the trooper trying to catch up to the speeding car.

But when the trooper closed the gap with the BMW near the edge of downtown Olympia and turned on his flashing lights, the car didn’t pull over. Instead, the driver took off.

The video, obtained through a public records request, shows the car weaving in and out of lanes, taking a hard right turn, running a stop sign and then a red light and narrowly missing cars before racing off in the direction it had come. The trooper did not give chase.

The Washington State Patrol (WSP) says drivers refusing to stop for troopers is an increasingly common occurrence. From January 1 to May 17 of this year, the agency logged 934 failure-to-yield incidents. While the patrol didn’t track this in the past, veteran troopers say there’s been a dramatic uptick in drivers fleeing traffic stops.

“Something’s changed. People are not stopping right now,” said Sgt. Darren Wright, a WSP spokesperson with 31 years on the job. “It’s happening three to five times a shift on some nights and then a couple times a week on day shift.”

It’s not just the State Patrol that’s noticing the trend. So are local police departments. The Puyallup Police Department logged 148 instances of drivers fleeing from officers from July 26, 2021 to May 18, 2022.

Asked if that represents a significant increase, Chief Scott Engle wrote in an email, “I could 1,000,000% say this is completely absolutely emphatically totally unusual.” …

Steve Strachan, the executive director of the Washington Association of Sheriffs and Police Chiefs, said these are common stories he’s hearing from his members across the state.

“It used to be sort of unusual and notable to see someone flee or to see someone simply choose not to stop on a traffic stop. Now it’s becoming incredibly common,” Strachan said.

Strachan and others in law enforcement connect the increase in failures-to-yield to passage last year of House Bill 1054, a sweeping police tactics law that, among other things, barred high-speed pursuits except in very limited circumstances. The law was part of a package of police reforms majority Democrats passed in response to the murder of George Floyd in Minneapolis and other high-profile police killings — reforms aimed at addressing racial disproportionality in policing.