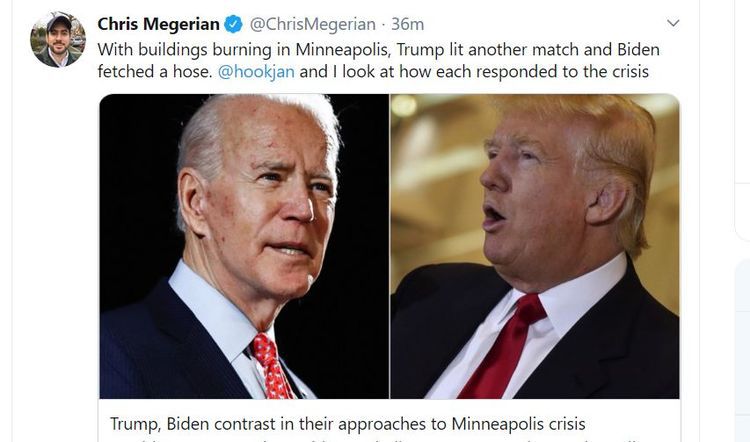 The Narrative Is Back on Track: LA TIMES Declares Minneapolis Isn't About Looting And Burning, It's About Trump

You know and I know that a big chunk of Minneapolis was subjected to black looters and white Antifa terrorists on Wednesday and Thursday, but that’s not the point, the point is The Narrative and The Megaphone-wielders aren’t going to be knocked off stride by a few hundred hours of lurid video.

WASHINGTON — President Trump saw burning buildings and decided to light another match. Joe Biden said he would bring a hose, then fix the foundations once the fire was out.
The crisis in Minneapolis, where protests are raging after a black man, George Floyd, was killed by white police officers, provided a window into how each man plans to campaign for the presidency and lead the country if elected in November.

Floyd was killed Monday while handcuffed and lying on the ground as one of the officers, Derek Chauvin, kneeled on his neck for several minutes. Chauvin was arrested on Friday and charged with third-degree murder and manslaughter; charges are expected against the three other officers involved, the county attorney in Minneapolis said.

The incident, which was captured on a widely circulated video, resurfaced the country’s unsolved struggles with race, policing and inequality, the kind of combustible situation that can confront a president at a moment’s notice and threaten to spiral out of control.

Trump and Biden have both condemned Floyd’s death, but the similarities ended there as they approached the case and the subsequent protests in radically different ways.

Trump’s response was characteristically inconsistent and inflammatory. He first expressed support for a federal civil rights investigation of the officers, then suggested that looters could be shot as the National Guard was deployed to the city.

Facing a backlash for his comments, Trump blamed his enemies for misinterpreting them and said he did not want the situation to “descend further into lawless anarchy and chaos” as he urged the Justice Department to complete a swift investigation.

Meanwhile, Biden sought to demonstrate the steadiness and empathy that he hopes voters will welcome after four years of Trump’s caustic and tumultuous presidency.

“I think the whole country, the world, see a contrast in Biden and Trump — a contrast that I hope will not be lost on the American people,” said Rep. James E. Clyburn, a South Carolina Democrat who is one of the former vice president’s most prominent black supporters. “Biden has demonstrated what I have said about him for a long time — he knows us and we know him.”

Trump has low approval ratings among black voters, who have been repelled by his history of racist statements and his contention that there were “very fine people on both sides” of white supremacist protests in Charlottesville, Va., three years ago. But his campaign has been trying to boost his numbers in hopes of limiting Biden’s advantage, and Trump said he was troubled by the video of a police officer kneeling on Floyd as he begged for air and became unconscious.

“That was a very bad thing that I saw,” he said on Thursday. The Justice Department is conducting a civil rights investigation.

Later, however, as demonstrations in the city became more violent and protesters set buildings, including a police precinct, afire, Trump’s focus shifted, and he lashed out on Twitter.

“These THUGS are dishonoring the memory of George Floyd, and I won’t let that happen,” he said. “Just spoke to [Minnesota] Governor Tim Walz and told him that the Military is with him all the way. Any difficulty and we will assume control but, when the looting starts, the shooting starts. Thank you!”

Twitter affixed a warning label to the tweet saying the message was “glorifying violence.” The suggestion that looters might be shot echoed some of the country’s most traumatic experiences with urban riots.

“The thuggification of black folk is a standard trope,” said Carol Anderson, chair of African American studies at Emory University in Atlanta. “That’s the narrative that you’re seeing now.”

It’s a trope, people. That means you should not believe your lying eyes.

Trump later said he only meant that looting would lead to violence.

“Looting leads to shooting,” he tweeted. “I don’t want this to happen, and that’s what the expression put out last night means.” …

Biden responded to Trump’s comments on looting by tweeting, “Enough.”

“He is calling for violence against American citizens during a moment of pain for so many,” Biden said. “I’m furious, and you should be too.”

He later delivered a more formal response in a short speech livestreamed on his campaign’s website, in which he called for the country to confront the “open wound” of systemic racism.

“Nothing about this will be easy or comfortable,” he said. “But if we simply allow this wound to scab over once more without treating the underlying injury, we will never truly heal.” …

In his remarks, he leaned heavily toward putting Floyd’s killing into the context of generations of officially sanctioned violence toward black Americans.

“The original sin of this country still stains our nation today, and sometimes we manage to overlook it,” he said. We just push forward with a thousand other tasks in our daily life. But it’s always there.”

Biden did not mention Trump by name in his remarks but clearly attacked the president’s response to the protests.

“This is no time for incendiary tweets. It’s no time to encourage violence,” Biden said. “This is a national crisis, and we need real leadership right now.”