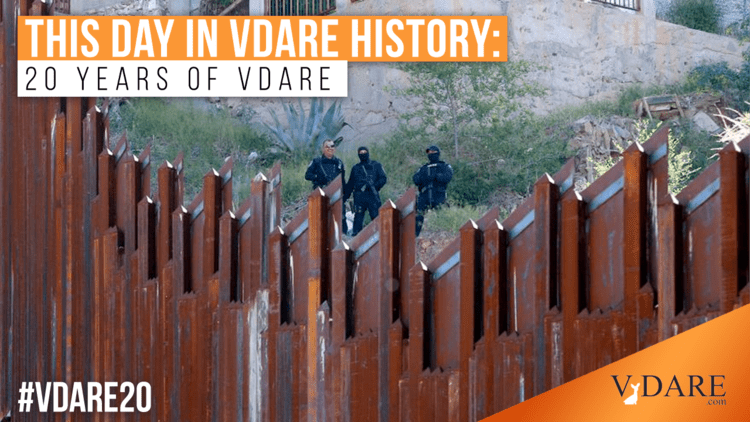 This Day In VDARE.com History, 2014: WASHINGTON TIMES on Mexican Army and Police Armed Border Crossings Into The US

Originally published here on VDARE.com on this day in 2014.

We´ve known about this sort of thing for years, but the Washington Times is now reporting it in Feds: Armed Mexican troops, police regularly jump border to cross into U.S. (Stephen Dinan, Washington Times, June 17, 2014):

More than 500 armed Mexican troops or police have strayed across the border into the U.S. over the past decade, according to numbers the Homeland Security Department provided to Congress on Tuesday that shed new light on how often the international boundary is violated by official agents.

The information comes even as the U.S. is trying to earn the release of Marine Sgt. Andrew Tahmooressi, who has been held by Mexican authorities since the beginning of April, when he drove through an official port of entry into Mexico while carrying firearms.

Gil Kerlikowske, commissioner of U.S. Customs and Border Protection, said in a letter to Rep. Duncan Hunter that such instances, known as "incursions" are "infrequent" but happen often enough that Mexico and the U.S. have created special liaison units to help negotiate the situations.

Mr. Kerlikowske said there have been about 152 instances, involving a total of 525 armed Mexican military or law enforcement, who have been documented encroaching on the U.S. side of the border since Jan. 1, 2004. There were another 148 instanced of Mexican police or troops encroaching without arms.

Mr. Kerlikowske said it was impossible to know how many of those incidents resulted in standoffs or armed confrontations with U.S. border agents or officers, but in 81 instances — totaling more than 320 people — either verbal or physical contact was made, and 131 people were detained.

“While the number of unauthorized incursions by Mexican authorities is relatively few, it is imperative for our officer safety to handle each situation assertively but with sensitivity and professionalism,” the commissioner said.

Mr. Hunter disagreed with Mr. Kerlikowske’s description of incursions as rare. “DHS states that the number of incursions is ‘relatively few,’ but that is a misrepresentation of the frequency of these occurrences, which Mexico invites through its activities along the international border. Also, there is a clear lack of consistency among DHS in handling these incidents, especially in cases of unauthorized incursions with armed authorities,” Mr. Hunter said.

He also said Mexico has been hypocritical in refusing to release Sgt. Tahmooressi even as its own troops and law enforcement are caught doing the same thing as the Marine. “It’s time for the U.S. to reconsider its treatment of the incidents and send a direct message to Mexico that incursions won’t be tolerated along the international border,” the congressman said.

Good for you, Representative Hunter, and how about doing more to fight illegal immigration?