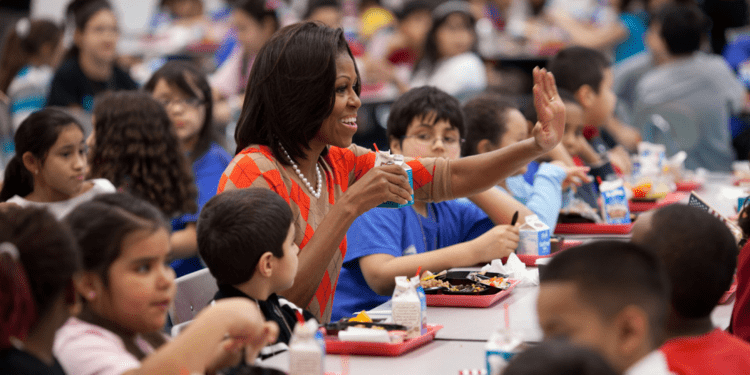 There's no reason why school lunches should concern the Federal Government at all, but since there's a national Department of Education and an Agriculture Department, they do, to the tune of $11 billion taxpayer dollars, and Michelle Obama famously made it a personal project to make this worse.

Instapundit blogs on it here:

Related: The Trump Administration Moved To Roll Back Michelle Obama’s School Lunch Program On Her Birthday. How dastardly. On her birthday!!!

Yes, the fact that unelected First Lady Michelle was somehow responsible for this program is blowing the media's minds:

By the way, the MSM seem to think it's creepy of the Trump Administration to be doing this on Mrs. Obama's birthday. I think it's creepy that they know when that is. (Maybe they're all Facebook friends with her?)
Of the three examples I've chosen, only CBS seems to realize that Michelle Obama had no more to do with the actual Federal school lunch program than Meghan Markle. Like Markle (before she bolted) her only job was to show up at events and give speeches.
But the lunches she was pushing were so bad (excuse me, "healthy") that the kids wouldn't eat them.
Here's how Michelle Malkin described it during the sixth year of the Obama Regime:

Look out, everyone: The nation's school lunch lady, Michelle Obama, is mad. With her federal nutrition program under fire across the country and now on Capitol Hill, Mrs. Obama put out a "forceful" call to arms this week to "health activists," according to The Washington Post.

She's cracking the whip. Her orders are clear: There must be no escape. The East Wing and its sycophants zealously oppose any effort to alter, delay or waive top-down school meal rules. Big Lunch must be guarded at all costs.

Progressives blame kid-hating Republicans and greedy businesses for the revolt against Mrs. Obama's failed policies. But the truth is right around the corner in your students' cafeterias. Districts are losing money. Discarded food is piling high. Kids are going off-campus to fill their tummies or just going hungry.

According to the School Nutrition Association, almost half of school meal programs reported declines in revenue in the 2012-13 school year, and 90 percent said food costs were up. Local nutrition directors are demanding more flexibility and freedom. Look no further than school districts in Los Angeles and Chicago.

As I noted in 2011, the L.A. Unified School District pronounced the first lady's federally subsidized initiative a "flop" and a "disaster." Principals reported "massive waste, with unopened milk cartons and uneaten entrees being thrown away."[More]

It's like that old story of the Mad Men type advertising executive who ran a terrific ad campaign for dog food, which ran up against an insuperable snag: "The dogs don't like it."
Also by Michelle Malkin on the ex-First Lady's lunch obsession: