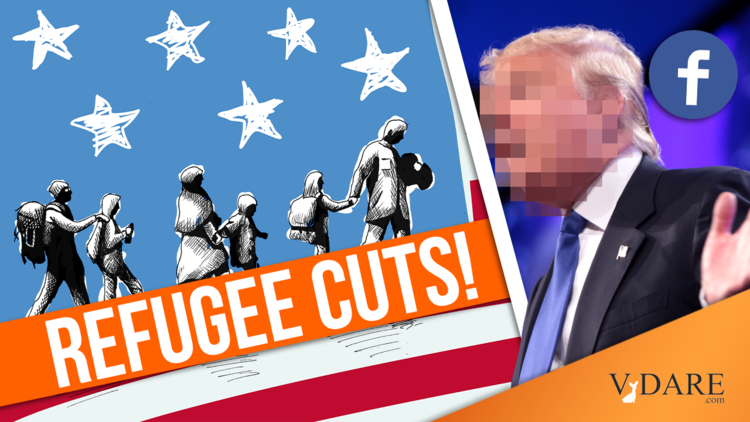 The Trump administration announced Wednesday it would reduce America’s refugee intake to the lowest number in history.

Just a few minutes before the congressional deadline to announce the refugee caps for the fiscal year 2021, the administration declared it would accept no more than 15,000 refugees. That is a 16.5% decrease over last fiscal year’s previous cap record of 18,000 refugees. The U.S. accepted 10,800 refugees before freezing admissions in response to the coronavirus outbreak [Trump plans to slash refugee admissions to US to record low, by Julie Watson and Matthew Lee, Associated Press, September 30, 2020]. Trump’s caps are significantly lower than Barack Obama’s high of 85,000 refugee admissions and planned 115,000 admissions for 2017.

This news is once again a sign that Trump is delivering on some of his immigration promises and is a real victory for the historic American nation. But Big Tech doesn’t want the American people to hear this good news, or know about the dangers of Joe Biden’s refugee policies

This week, Facebook announced it took down Trump campaign ads that warned about Biden’s plans to accept refugees from dangerous parts of the world. The ads claimed Biden would increase refugee intake from Syria, Somalia and Yemen by 700 percent. “We rejected these ads because we don’t allow claims that people’s physical safety, health, or survival is threatened by people on the basis of their national origin or immigration status,” Facebook spokesperson Andy Stone said in a statement explaining why the company banned the ads [Facebook removes Trump ads on refugees and Covid-19, by Jo Ling Kent and David Ingram, NBC News, September 30, 2020].

Biden wants to raise the maximum refugee cap to a staggering 125,000 admissions per year.

While Big Tech attempts to stifle this powerful message, Trump is delivering it to his massive rally crowds. “Biden will turn Minnesota into a refugee camp, and he said that — overwhelming public resources, overcrowding schools and inundating hospitals. You know that. It’s already there. It’s a disgrace what they’ve done to your state,” the president said at a Minnesota rally this week [Trump plans to slash refugee admissions to US to record low, by Julie Watson and Matthew Lee, Associated Press, September 30, 2020].

Trump knows Middle America wants control of its borders and less immigration. On the refugee front, he’s keeping his promise.