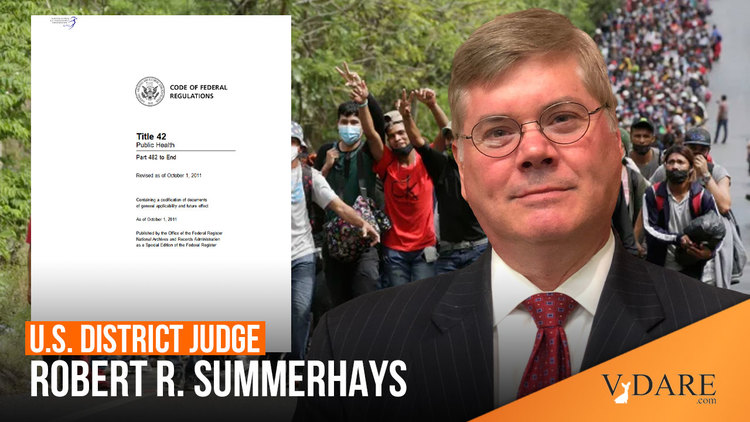 Trump Judge Will Block Biden From Lifting Title 42. But What’s It Mean If Biden Has Stopped Enforcing It?

Judge Robert Summerhays of the U.S. District Court for Western Louisiana announced on Monday that he would issue a temporary restraining order to block the Biden Regime from stopping Title 42 expulsions at the border with Mexico [Federal judge temporarily blocks Biden administration from ending Title 42, by Jacor Fischler, Missouri Independent, April, 25 2022]. The Trump appointee will act in response to a lawsuit against the regime. The problem: Biden has already stopped enforcing it.

A month ago, the regime announced it will lift POTUS 45 Trump’s implementation of Title 42, which permits the immediate expulsion of illegal aliens for health reasons, on May 23. Biden’s own people said the Border Patrol could expect to encounter up to 18,000 illegals per day. So Arizona, Missouri, and Louisiana filed suit. Eighteen others joined later.

Biden’s plan to rescind Title 42 has been halted. #nationalsecurity #southernborder

Attorneys for the states and for the federal government “will confer regarding the specific terms to be contained” in the court’s temporary restraining order “and attempt to reach agreement,” the court filing says.

Such a ruling likely is a bad sign for the Biden administration in a broader legal challenge to stop government plans to fully end Title 42 on May 23. More than 20 Republican-led states filed a lawsuit over those plans, and then sought this order when they learned the Biden administration began to scale back the use of Title 42 ahead of that date.

Summerhays ruled rightly, but as a practical matter, the TRO won’t do much.

Biden’s goal: Brown the country, and dispossess and replace the Historic American Nation.

Traitor Joe Biden has already stopped Title 42 expulsions at the border for all illegal aliens but Mexicans, sources say, but is expelling those illegals under another provision of immigration law.https://t.co/ZuHqtRrCdS

As well, Biden releases almost 40 percent of the illegals he does not expel under Title 42. So far this fiscal year, that total is nearly 400,000. Since January, the figure is more than 750,000.

Let’s Go Brandon’s border treason will continue unless and until Republicans retake Capitol Hill, then impeach and remove Biden and Vice President Kamala Harris. The new GOP House speaker would be president.

Problem is, the GOP likely won’t impeach Harris, too. Even assuming House Republicans impeach Biden, the Senate might not convict him. If it did, the new president is Harris.