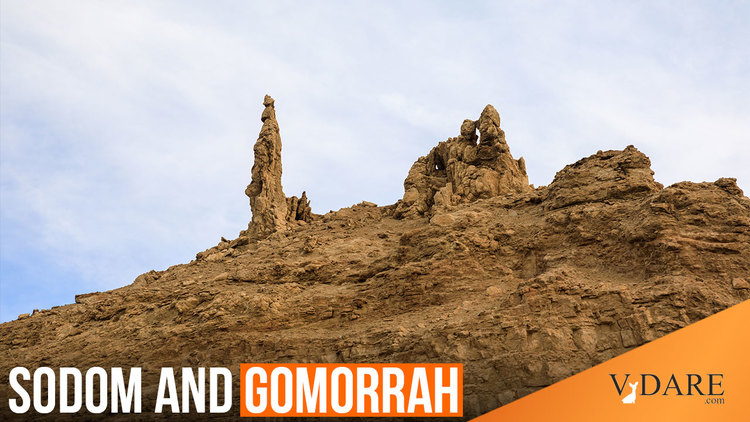 Were Sodom And Gomorrah Demolished By A Meteor?

It’s kind of weird how some old cultures liked to keep detailed historical chronicles (the imperial Chinese, some medieval European kings and monks) while others (Hindus) did not.

For example, we know a lot of history from the Old Testament, such as:

Abstract
We present evidence that in ~ 1650 BCE (~ 3600 years ago), a cosmic airburst destroyed Tall el-Hammam, a Middle-Bronze-Age city in the southern Jordan Valley northeast of the Dead Sea. The proposed airburst was larger than the 1908 explosion over Tunguska, Russia, where a ~ 50-m-wide bolide detonated with ~ 1000× more energy than the Hiroshima atomic bomb.

A 150-foot-wide stony meteor (apparently) exploded over a remote part of Siberia in 1908 and knocked down 80 million trees over an 830 square mile area.

A related team argued last year in Nature that this very early city near the Euphrates had been depopulated by a cosmic event around 12,800 years ago.

Anthropologist Doug Jones of U. of Utah says that the eruption of Oregon’s Mt. Mazama (now Crater Lake National Park) 7,700 years ago, which blew the top mile of elevation off the volcano, is accurately recorded in Klamath Indian oral lore. That appears to be the oldest remembered event.

Keep in mind that this theory about Sodom could be all wrong.

On the other hand, we know remarkably little about Jews in the first millennium A.D. For example, we have virtually no clue from texts about when the Ashkenazi of northern Europe emerged. Razib Khan writes on Substack:

Their ultimate origins were a mystery to the gentiles around them, and indeed became forgotten even to themselves. Were they the descendants of the ancient Hebrews, converts to the religion, or a mix of both? These possibilities were hidden from the Jews of Eastern Europe as their memory of their past faded and their written culture focused purely on matters of religion. …

It is only with genetics in the 21st century that this theory has been able to be tested, and ultimately found wanting. The Ashkenazim are the synthesis of ancient Levantine Jews and various Mediterranean European populations with whom the former mixed. Their origins date back to the fall of Rome, not the fall of Khazaria. …

If you are Ashkenazi Jewish and look for relatives in 23andMe, the evidence of relatedness is clear. Whether your ancestors are German, Hungarian or Russian, you find distant “relatives” galore, with only minimal correlation with geography. The reason for this is that just as the histories and culture would suggest, genetics reflects the reality that the Ashkenazim all derive from a small number of common ancestors. …

But what about the maternal lineage, by which traditional Judaism defines one’s Jewishness? A 2013 study analyzed the mtDNA lineages of Ashkenazi Jews and concluded that 2,000 years ago, the foremothers of this population were Europeans and likely gentiles. More specifically, the maternal lineages of Ashkenazi Jews are broadly common across the Western Mediterranean. The implication is that Jewish men from the Eastern Mediterranean took local wives during classical antiquity, and the resultant mixed community gave rise to today’s Ashkenazim.

So, the assumption arose that because Ashkenazi were ancient Hebrews in the male line and, more or less, Italians on the female line that the Ashkenazi arose in the city of Rome around the time of Augustus and Christ. After all, the apostle Paul preached to a lot of Jews in Rome a couple of generations later.

But that rather neat assumption ran into the problem raised by recent ancient DNA findings from grinding up Roman skeletons. The population of Rome in Republican times was basically indigenous central Italians, but by Imperial times was dominated by imports (immigrants and slaves) from the eastern Mediterranean. But during the Dark Ages, when the population of Rome cratered, that cosmopolitan urban population vanished—either died off or left.

In Isaac Asimov’s Foundation (which is inspired by Gibbon’s Decline and Fall of the Roman Empire), the capitol planet Trantor is completely covered in buildings because spaceships from the Empire bring food as tribute. But when Imperial power collapses and the tribute ships stop coming, the luckier residents of the capitol planet flee and others starve. But, in a moving scene, a few plucky people start tearing up the buildings and planting seeds from museums.

But, on Earth, mostly, urbanites don’t switch to farming. Instead, outlying farmers move in after the big die-off.

Eventually, Renaissance Rome was repopulated by Italian peasants from the surrounding countryside, basically the same stock who had built Republican Rome in the first place.

So how did the ancestors of the Ashkenazim survive in Rome through the Dark Ages? The latest guess is that they mostly didn’t. Instead, a second wave of Middle Eastern Jews arrived in southern Europe during the Dark Ages

A 2017 paper … First, all the models agree that half the ancestry of Ashkenazim is best assigned as coming from Levantine populations: Palestinians, Syrians and Lebanese. Since Roman Jews were Levantine, and modern Jews have Middle-Eastern paternal lineages on the Y chromosome, this seems almost certainly correct.

What about the other half? It is clearly European. Earlier, more provisional work had indicated it was solely Southern European. This would place the admixture event before 1000 AD, when we know that Jews already began to appear in German-speaking lands. But zeroing in on long segments of relatedness, which indicate more recent admixture between populations, the authors found that these tended to be more closely related to Eastern-European gentile samples: Russians, Poles and Lithuanians. This is a much smaller component, but it is definitely detectable within the Ashkenazi genomes. Looking only at a finite number of mtDNA lineages this subtlety escaped detection because there are so few lineages distinct to particular regions of Europe.

Surveying patterns of genetic homogeneity within the Ashkenazi genome, the authors were also able to calculate when the group went through its sharp bottleneck. In other words, they shared a small number of common ancestors. Though some uncertainty remains about the date, sometime around 1250 AD is the best estimate for the bottleneck. The mixture of Southern European ancestry into the Ashkenazim predates this significantly. The mixture of Eastern European ancestry though postdates it. This comports well with the historical evidence, especially for the latter event, as the settlement of Eastern Europe beyond the core region of Germany seems to date to the second half of the Middle Ages (1250-1500 AD).

But the date for the admixture of Southern Europeans and Middle Easterners, the latter being presumably Jewish males, is a bit surprising: it would be not much earlier than 750 AD, over 250 years after the fall of the Western Roman Empire. …

It seems then that the origin of the Ashkenazim owes to a later migration of Middle Eastern Jews who were under Muslim rule, and mixed with native Italian and Iberian Christians during the Dark Ages.

For example, Charlemagne employed as a diplomat and trader Isaac Judaeus, who was born on the Mediterranean coast of France. In 797, Charlemagne sent Isaac as an ambassador to Harun al-Rashid, the famous caliph in Baghdad featured in the Arabian Nights.

The caliph gave Isaac an elephant to take to the emperor, which, according to European chronicles, he presented to Charlemagne in Aachen, Germany on July 20, 802. The chronicles record that Abul-Abbas the elephant died in 810.