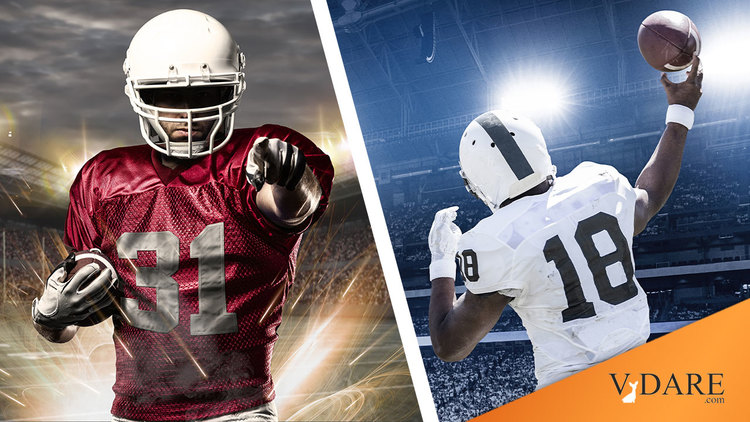 The IQs of NFL players are back in the news due to the controversy over race-norming cognitive testing used in the NFL’s payout to retired players for dementia caused by concussions. Here’s a 2012 study in the Journal of Sports Economics that tabulated the Wonderlic IQ test scores for 350 black and 146 white NFL draft picks in 2004–2008:

Both scores are well above national averages for their races. Why? My guess is that players’ agents help them prep for the test.

But also, some positions, such quarterback, center, and middle linebacker include managing other players on the field with shouted instructions before the play begins. These shouting positions are near the center of the football field (so that all players on the team can hear), so footspeed isn’t as important. Not surprisingly, whites are more common at these spots.

And with most things in life, all else being equal, higher IQ is better than lower IQ, although it doesn’t matter that much in the non-managerial positions in the NFL draft. Finally, smart guys are less likely to do things so dumb that even star football players have their pro prospects ruined in high school or college, like shoot somebody who dissed them at a block party.

This table is from:

Abstract
Extending the work of Berri and Simmons on the National Football League (NFL) player draft and the Scouting Combine, the authors use the Wonderlic cognitive ability test to test one implication of a simple Phelps model of statistical discrimination in the NFL draft. The authors treat Wonderlic scores as a noisy signal of a player’s adaptability to the NFL game that may be more informative for White players than it is for Black players. The authors find that Wonderlic scores are important in explaining relative draft position for quarterbacks, offensive linemen, and tight ends. At the same time, the authors find limited evidence to support statistical discrimination based on Wonderlic scores.

From the Associated Press:

PHILADELPHIA (AP) — Thousands of retired Black professional football players, their families and supporters are demanding an end to the controversial use of “race-norming” to determine which players are eligible for payouts in the NFL’s $1 billion settlement of brain injury claims, a system experts say is discriminatory.

… Under the settlement, however, the NFL has insisted on using a scoring algorithm on the dementia testing that assumes Black men start with lower cognitive skills. They must therefore score much lower than whites to show enough mental decline to win an award. The practice, which went unnoticed until 2018, has made it harder for Black former players to get awards.