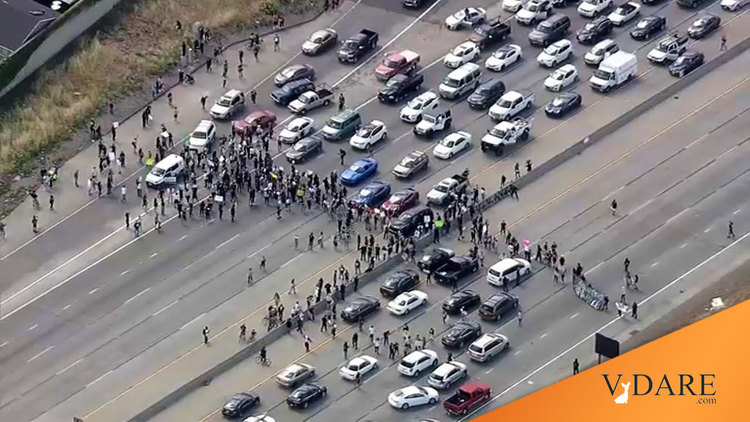 Why Is New Legislation Needed To Stop Antifa Blocking Roads?

Marco Rubio, facing an unexpectedly tough reelection fight, is trying to appeal to the Republican base. He’s introduced a bill that would crack down on the leftist ”protest” tactic of blocking interstate highways.

Deemed the Safe Passage on Interstates Act, Sen. Kevin Cramer (R-ND) has sponsored the bill alongside Rubio. In a press release shared exclusively with Breitbart News, Marco Rubio said the legislation would aim to protect “commuters, first responders, and other travelers on our nation’s roadways.” Though some states have adopted their own laws to protect against such protests, no federal law exists.

“Antifa and other radical protesters who block highways disrupt law-abiding Americans from driving to work, school buses from getting kids to school, and ambulances from getting to the hospital,” said Rubio. “It’s ridiculous that there is no federal law against this type of stunt.”

“We need to make sure people face criminal penalties for blocking interstate systems that we all rely on,” he added.

We cannot support or oppose individual candidates or pieces of legislation. Yet there’s no reason to even take a position on this. The federal government already has the power to punish those who hinder interstate trade. In fact, this is the precise rationale for why the federal government supposedly has the right to tell you what to do with your own property under the Civil Rights Act.

The federal government could invoke the same constitutional justification for the Civil Rights Act of 1964 to directly use federal officers to ensure the freedom of Americans to use the roads.
In Heart of Atlanta Motel, Inc. v. United States, the Supreme Court justified the federal government’s right to force desegregation in a motel because of its constitutional right to regulate interstate commerce. Indeed, it was the specific obstacle that segregated businesses posed to “interstate travel” that justified federal intervention [Heart of Atlanta Motel, Inc. v. United States, 379 U.S. 241 (1964), Justia US Supreme Court, December 14, 1964].
If this principle permits federal intervention against a motel because the business partially depends on interstates, obviously it would justify federal action to prevent obstruction on the interstates themselves.

Blocking roads is one of the most dangerous protest ”tactics” that can be used. Those who need emergency health care don’t have time for progressives pretending to be revolutionaries storming the Bastille. More commonly, the tactic simply makes life harder for ordinary people who need to get to work, as most Americans don’t have their existences subsidized by a massively funded NGO.

The more troubling aspect of this tactic is that it practically guarantees confrontation. Whether it’s armed antifa setting up a ”checkpoint” as if it is a government-in-waiting, or frustrated drivers storming out of the car to physically remove leftists from the road, blocking transportation practically guarantees violence. Preventing such a situation from developing in the first place is one of the most important things any police force at any level (federal, state, local, and tribal) can do.

Instead, what usually happens is that the police do nothing until frustrated drivers begin trying to do their job for them. Then the police begin arresting ordinary people. It’s classic anarcho-tyranny. American life features more and more of these no-win situations in which ordinary people are forced to jump through increasingly elaborate and nonsensical legal scenarios because our government won’t fulfill its basic responsibilities.

Rubio’s bill sets up firm penalties. These include:

That all sounds nice, but it means nothing unless there is the will to enforce existing law. We should be seeing police preventing such dangerous situations from occurring now.

On a personal level, I won’t oppose new laws, but there’s a street theater element to this that misses the real issue. As with illegal immigration, we already have the laws we need. What’s lacking are elected officials who put the safety of all Americans, regardless of political beliefs, first. We also need police who are willing to enforce existing laws. The problem is not a lack of legislation. The problem is a basic failure of the institutions in ”Our Democracy” to do their job. Until that changes, the ruling system will continue to lose legitimacy, as it should.