VDARE Radio: Why Trump’s Tweet On Flag Desecration Was So Important

This is Virginia Dare and you're listening to VDARE Radio.

Donald Trump did it again. Early on Monday morning, while everyone (who doesn’t have children) was asleep, the God-Emperor strolled to his laptop, logged into Twitter, and unleashed a masterpiece which dominated the news cycle again. He tweeted:

Nobody should be allowed to burn the American flag - if they do, there must be consequences - perhaps loss of citizenship or year in jail!

This is hilarious on several levels. First, it’s another example of what Trump’s Internet fandom have termed “4-D” chess. The Flag Protection Act of 2005, which would have outlawed flag burning, was introduced by none other than then Senator Hillary Rodham Clinton. Second, Trump’s proposal totally dominated the news cycle. Instead of the media attacking him, they were forced once again to respond to his new initiative. And I can’t help but think this is deliberate. I’m reminded of a picture tweeted out the night before of Kellyanne Conway grinning and looking over Trump’s shoulder as he’s on his laptop. 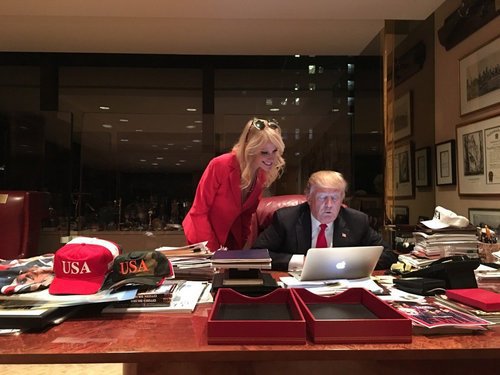 On the other hand, the timing of Trump’s tweet lines up with a report on Fox News which featured students burning the American flag. Maybe Trump just has good instincts. But either way, it works.

Third, Trump’s tweet forces his far-left opponents into a trap. We are being told that he is threatening the First Amendment and free speech. Fair enough. Does that mean restrictions on so-called “hate speech” should also be opposed? Does not that mean the actual laws which exist against hate speech in the so-called free nations of Western Europe are illegitimate? If it is impermissible to ban desecration of a symbol we are all supposed to value, surely it is even worse to ban actual speech discussing policies.

It also means Trump is seizing the flag as a symbol of his movement. The prospect of Donald Trump as president has driven the Left into a frenzy. Now, one can easily imagine far left protesters burning American flags as some kind of show of “resistance” to Donald Trump. The optics will speak for themselves.

Fourth, it’s just a popular issue. The Flag Desecration Amendment was a staple of the conservative movement in the 1980’s and the 1990’s. It was also consistently popular. It is the kind of “populist” wedge issue Trump can use to motivate his supporters. It’s also something which will almost certainly make his political enemies overreact.

Fifth, Trump is broaching the idea of stripping people of citizenship. Leftists are sure to be upset about this, but this is a real issue. In Europe, one of the most divisive political questions is whether Muslims who fight with the Islamic State – almost none of whom are ethnically European anyway – should be stripped of their citizenship.

Besides, why shouldn’t people be stripped of their citizenship? We are told Americans are not a people defined by blood or heritage. We are not a people at all really. Instead, we are defined by common ideas. But people disagree on what those ideas are. If any kind of an abstract, proposition nation form of civic identity is going to be work, there has to be something which everyone who is part of the political community agrees we share.

If not the American Flag itself, what else is there? And if someone can’t even restrain themselves from desecrating the flag, why should they be considered part of the national community?

If people think there is something “un-American” about banning flag burning, what they are really saying is that being American is something inherent and unchangeable. It’s like being part of your family – you can disagree or even violently hate people in your family, but it’s still your family no matter what. And the same is true of a real nation, defined by kinship and culture. If America is to be defined purely as a civic nationalist project, then we are going to need certain things in common. Trump’s civic nationalism practically requires prohibiting flag desecration.

I don’t see why the would be flag-burners are mad – this is how they’ve supposedly defined America all along. But then, that’s the point. They want to ban legitimate speech while allowing flag burning because hatred of this historic American nation is what animates their entire movement. Even their arguments for “civic nationalism” or a “proposition nation” were made in bad faith. Yet again, Donald Trump is showing America’s enemies for what they are. And he hasn’t even taken office yet.

Still not tired of winning.